If you are able, spend a day in London before Sunday 5th February 2017 and visit the Opus Anglicanum exhibition at the V&A.  It celebrates a time when English work (Opus Anglicanum) was sought after by popes, churches, wealthy families across Europe and as diplomatic gifts. Techniques which are still in use today, split stitch and couching, were employed by professional artists (skilled women and men) in workshops behind St. Paul’s Cathedral and in Cheapside from the late 12th to the mid 14th centuries. One misconception was that nuns were responsible for the work but recent knowledge has shown that towards the end of the period, workshops led by men were the norm.

Much of the  needlework on display was on linen or silk cloth lined with linen. The silk was imported from China or Italy along with threads which had been especially dyed. Copes, chasubles or orphreys were stitched with scenes from the life of Christ, interspersed with flora and fauna, for use in ecclesiastical ceremonies.

Over half the exhibits in the exhibition are from the V&A collection whilst the remainder have been borrowed from various establishments across Europe and North America.  Some of the items are for secular use – for example, the surcoat worn by Edward, the Black Prince, along with his shield, two seal bags, a pair of Episcopal shoes from the tomb of Archbishop Herbert Walter (1170-1200) in Westminster Abbey, and horse coverings.  You can also see a large wooden chest which was used to store copes.

One of the most fascinating exhibits was a piece which showed both sides of the work.  This had been executed on velvet so it was easy to see the relief.  Also, a couple of copes still had seed pearls as part of the decoration, intact.

The images below show a  detail from the Jesse Cope, 1310-25, from the V&A collection and a musical angel on horseback from the Steeple Aston Cope,1330-40, loaned by the church wardens at Steeple Aston in Oxfordshire.

I urge you all to go along and be stunned (and humbled) by textiles which are over seven hundred years old. I had a lovely day. 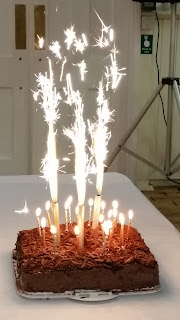 EAST is 21 years old this month and we had a small tea party to celebrate.  Members were joined by friends, Braintree Museum and Warner Textile Archive staff.  Some past EAST members were also able to join us.

As with all great celebrations we had a celebratory cake, our one kindly made by Anthea.  We had live music too supplied by Larry Berkovitz.

Thanks to everyone who made the afternoon a success.
More photos to follow. 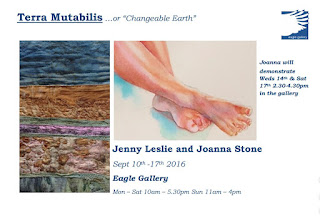 EAST member, Jenny Leslie is exhibiting with another artist Joanna Stone at the Eagle Gallery in Bedford from the 10 to 17th September 2016.
The gallery can be found at –
101 Castle Road
Bedford
MK40 3QP

Returned last evening from an exhilarating if tiring Group weekend workshop with wonderful Diane Bates. Almost all of us were there including our mentor Anthea Godfrey, just Ellen and Janette missing the fun, although Janette managed a visit yesterday afternoon. 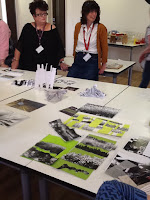 Anthea and Susan during the Saturday evening discussion. 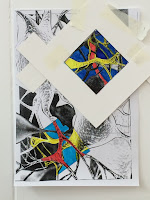 We all had a great time and maybe some of the work will feature in future exhibitions. Also our thanks must go to the Zinc Arts Centre in Chipping Ongar (Essex) for the use of their excellent facilities andfriendly staff. 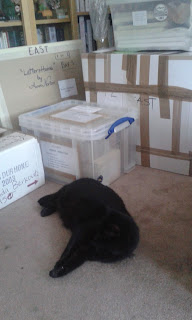 When storing work for other members of the EAST group it is important to have good security – a guard dog is a good method, or as here a guard cat!

The end of the journey …. 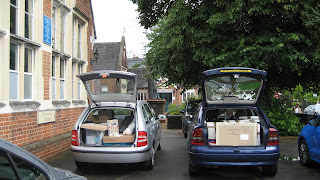 Between the Lines has now made its way home courtesy of our “man with a van”, David of D-2-D Courier Service who brought everything back from Landmark Arts Centre to Braintree Museum efficiently and safely.  All the time we were kept up to date with when things were picked up and delivered so we would thoroughly recommend this service.
Thanks also to the lovely, efficient staff at Landmark Arts Centre, Teddington – what a pleasure to work with and a beautiful space to hang our work.
Now E.A.S.T are busy working towards our next exhibition Following a Thread which opens at Braintree Museum, Braintree, Essex, UK on 22 April 2017.

Don’t miss your chance to see Between the Lines at Landmark Arts Centre, Teddington, TW11 – it finishes this weekend (Sunday 10th July 2016). 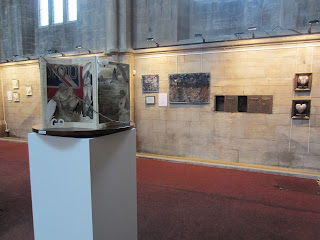 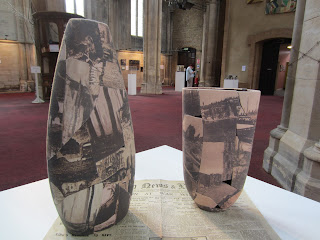 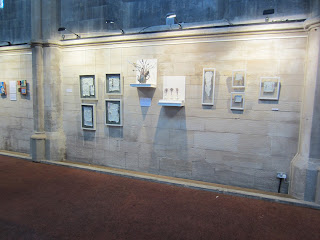 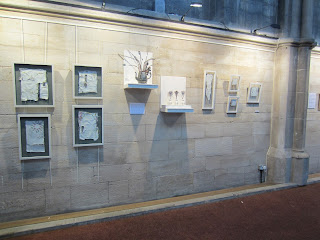 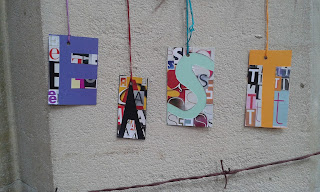 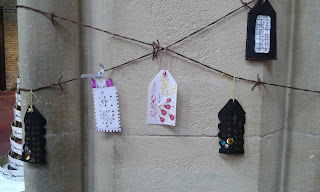 Many of our visitors chose to take their identity tags home, but we were pleased that others were very happy to share a selection for the gallery’s installation. 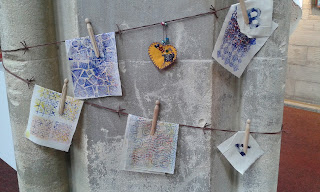 Some of our visitors started on the printing table before adding stitch or paper to their completed tag, and it was particularly nice to see visitors from the very young to adults joining in – several staying more than an hour enjoying a moment of creativity. 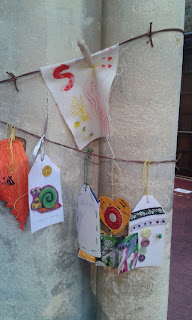 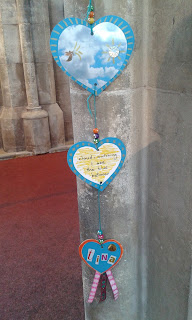 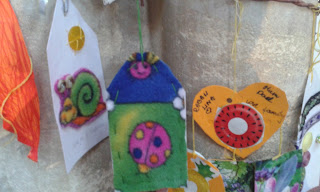 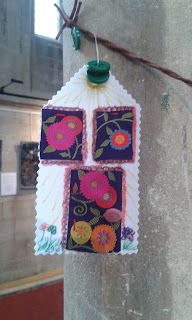 Thanks must go not only to the E.A.S.T members that made the journey across to Teddington, the E.A.S.T members who collected together ideas and materials to prepare for the day, the staff at Landmark, but also to the visitors who participated.
51.426799-0.331342

When Janette, Carol and I went to the Landmark Arts Centre on Tuesday to give a talk about the research behind “Between the Lines”, I was able to take some more pictures of the exhibition.
Lesley and her right hand man, Tim, had wrapped “barbed wire” around the pillars and hung from it the identity tags  the EASTies had made as examples for the workshop “Ready, Steady, Stitch” which will be happening at the Arts Centre on Sunday as part of the Teddington Fair.
So if any of the images  below spark your creativity, come along and have a go. Melinda, Janette, June, Lorna, Tricia, Felicity and I will be there, so it will also be a good time to quiz us about our exhibits as well as adding your own take on identity to the new installation. 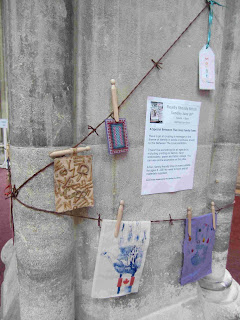 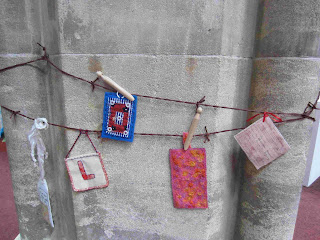 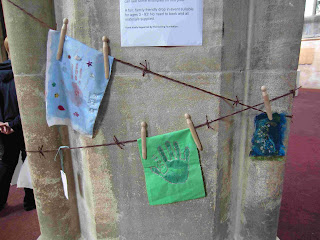 From the Earth an Exhibition to celebrate Ethical Textiles

Caroline Bell and I are very pleased with how the exhibition, From the Earth at Mardleybury Gallery [Datchworth SG3 6SG] has been going. The Exhibition is on for a few more days..   it closes at 4 on Saturday. The Gallery has been a very good setting for the Exhibition. 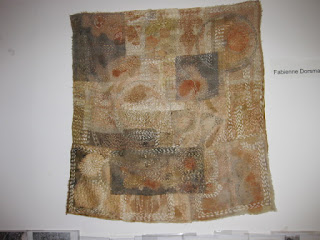 We have three guest artists, above is the work of Fabienne Dorsman Rey, who also led one of our workshops at Art Van Go. We also have work by the India Flint who I feel is the initiator of  the current re surge of interest in natural dyeing and eco leaf printing, as well as Alice Fox’s great work. 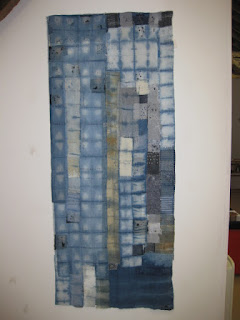 It has been great to be able to include work by some experienced UK artists above is Reef Marks by Shelley Rhodes. 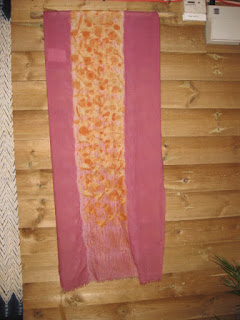 There is also work by local artists and artists who are just setting out, this wonderful piece is by Rebecca Robins.
It was good to have Margaret Talbot’s Petrified Trees, East textiles were well represented.
Jenny Dean author of many books and very experienced natural dyer gave us a very encouraging introduction at the Private View last Friday.
« Previous 1 … 7 8 9 10 Next »