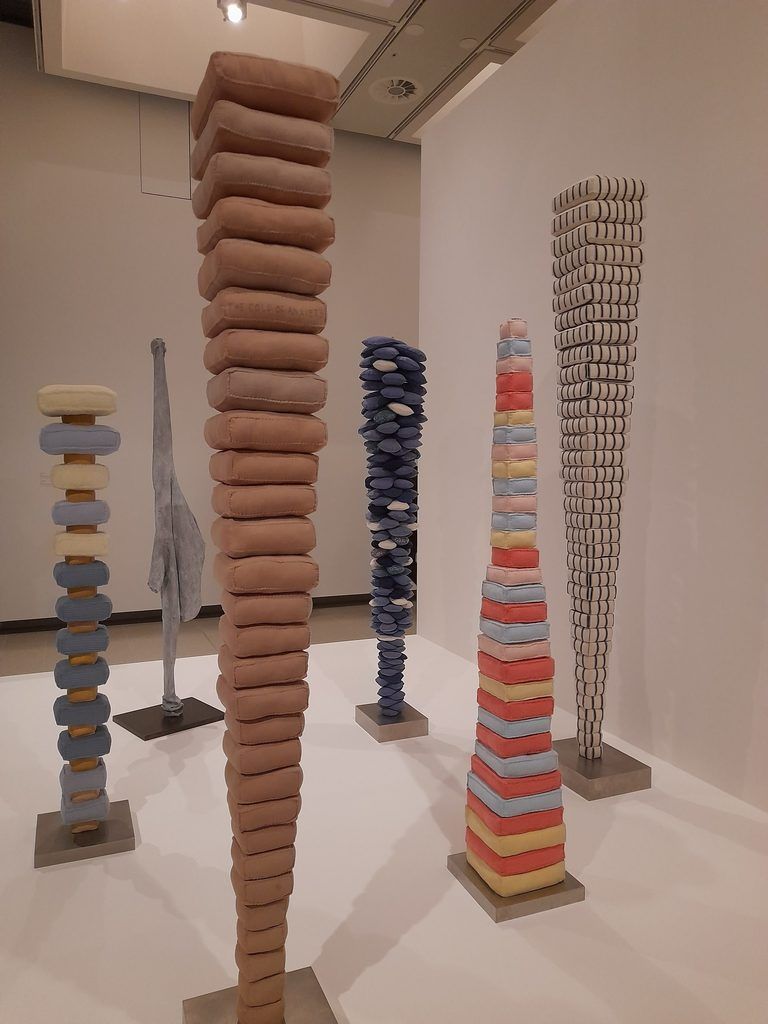 When I heard a review of Louise Bourgeois: The Woven Child, an exhibition at the Hayward Gallery, I was interested to learn that the artist was at her most prolific later in life. This retrospective of the French-American artist Louise Bourgeois (1911-2010), focused on her textile work which she began mostly in her 80s. Her work was inspired by her life experiences and her family – but not always in a positive way. The family business in France, was in tapestry repair and so textiles were a natural medium for her to be drawn to.

Often Bourgeois used clothing that had belonged either to herself or her mother – apparently she was a major hoarder. The clothing was often of the most delicate fabrics that made you wish you could touch them. Several pieces were enclosed in cages (or cells) which have their own symbolism – globes and mirrors were also frequently used.

Another frequent motif was a stand holding reels of thread each with a single needle connecting to a large tongue shaped element – I really don’t know what that was supposed to mean but I could make a few guesses. Her work could be disturbing in its imagery but it was no less intriguing for that.

There were also a lot of 3D figurative sculptures and one set was particularly interesting because of its display. The pieces related to Bourgeois’ pregnancy and birth of her son, and were placed in front of a convex mirror which distorted not only the sculptures but the gallery and its visitors.

Having made cloth dolls in the past, I did wonder how some of her sculptures were made. I speculated they may have been created with an armature, then scraps of fabric stitched over. I liked the rawness of these – and I am sure they were to represent raw emotion. There was also meaning in the idea of patching and repairing.

And you could not have a Bourgeois exhibition without a trademark spider – the mother and the weaver. Repairing, nurturing but also frightening – according to Bourgeois.

As well as ‘typical’ Bourgeois works the exhibition included smaller pieces – often quite delicate. This included some fabric books, the pages of which were displayed as separate panels. Ribbon weaving seems to have been a favourite technique.

And patchwork – with a web like pattern. Those raw edges appear again.

This piece consists of hooks and eyes pinned to cloth and was part of a collection of ‘experiments’, or so it seemed.

She often used artificial flowers (very French) and even the occasional bead. This piece is a reference to time passing.

I loved these sculptural pieces. It was another theme that got repeated throughout the show.

This is just a tiny snapshot of what was on display and there was so much more to explore. I am still debating on whether I should purchase the catalogue.

The exhibition closes on 15 May and the Hayward is open Wednesdays to Sundays (but also the Bank Holiday Monday on 2 May). If you are unable to visit you might be interested to see some of the exhibition online. There is also a video with Tracy Emin (another artist who works with textiles) which is worth a view.

But I think perhaps an important thing to come away with is that even in your 80s you can still be creative and productive and perhaps it will be the time when you produce your greatest works.