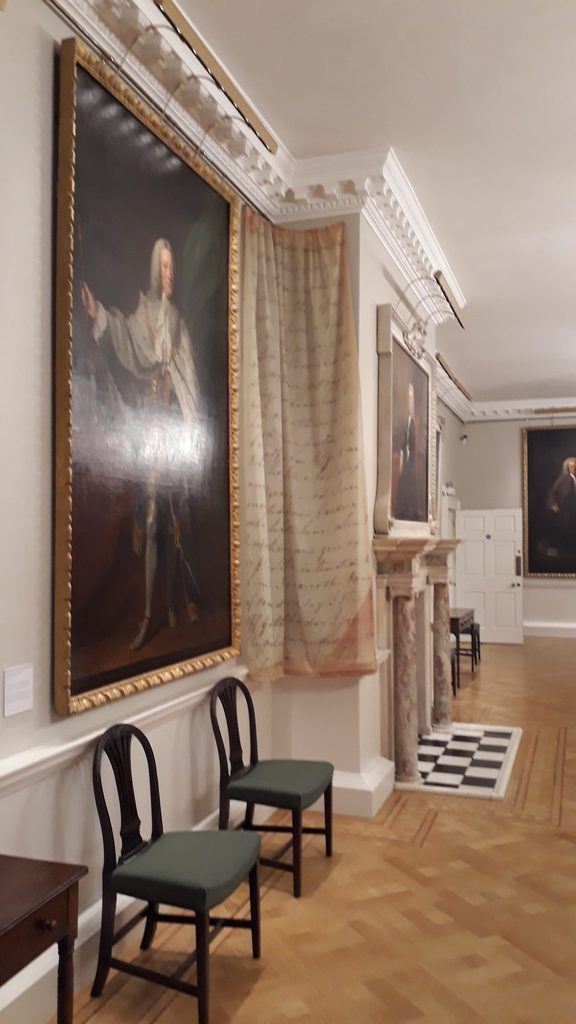 The London Foundling Museum is currently displaying the exhibition Fighting Talk: One boy’s journey from abandonment to Trafalgar. It tells the story of George King (1787-1857), a foundling boy who wrote a memoir of his life. As far as we know it is the only known autobiography of someone admitted to the Foundling Hospital in the eighteenth-century. It allows us to follow his story from life at the Hospital, via his employment at a confectioner’s shop, then as a sailor fighting at the Battle of Trafalgar. His story ends with his life as a Greenwich pensioner.

Alongside this historical narrative, the Hospital commissioned an artist’s response and it includes some textile pieces. This work is by award-winning artist, photographer and researcher, Ingrid Pollard and is called Ship’s Tack. It refers to George’s personal life as well as a wider naval history and its associations with trade and slavery. Pollard’s two textile hangings refer to the names of people and places which she sees as anchor points in George’s life. As curtains they feel to me as they are offering glimpses of a life, but also reference the sails of the ship which allowed the ship to catch the wind and cross the ocean, but were probably made by slave labour.

George King was so named as an act of patriotism, at the request of one of the lady supporters of the Hospital. It is fitting then that one of Pollard’s printed voiles is placed next the portrait of King George II, the first patron of the Hospital and the man who signed its Royal Charter.

Pollard’s textiles are not the only fabric items on display. In Fighting Talk there are also items of clothing similar to those worn by George as a boy (at the Foundling Hospital), as a sailor, and as an elderly man (at Greenwich Hospital).

The drawstring bag would probably have held a ‘housewife’ or hussif – a sewing kit which all sailors owned. This allowed them to make repairs to their clothes and ensure they were neat at all times. They may even have mended the sails of the ships. Sewing and mending were skills George King would have learned as a foundling boy. This item also reminded me of some of my own work, made for EAST’s 2014 exhibition – Between the Lines which took as its starting point the 1914-18 global conflict we now know as World War One. The work I did for that exhibition is shown below. That piece referenced ‘Lady Smith-Dorrien’s Hospital Bag Fund’ – a charity providing bags for military personnel (on land and at sea) to keep their belongings safe.

Perhaps one of the most surprising pieces of textiles on display is a fragment of the actual flag draped over Lord Nelson’s coffin. It is particularly relevant for the story of George King who was on board the ship that towed Victory back to port.

Fighting Talk and Ship’s Tack both reference global trade and links to slavery, and this was particularly relevant in the production of textiles in the eighteenth century. However, as one of the films on display reminds us, certain areas of the fashion industry still rely on slave labour to produce goods for fast fashion in the twenty-first century. Pollard’s seemingly ‘innocent’ ships dotted around the Museum are a reminder of this often hidden history. Her work consists of innocent paper boats such as a child might make. They are in fact ceramic – a reminder that things are not always as they are seen? To me this suggests the need to play close attention to the world around us and not take things on face value and to question what the story is behind it.

Both Fighting Talk and Ship’s Tack are on display at the Foundling Museum in London until 27 February 2022. For those unable to visit the Museum in person it is also possible to take a virtual tour of Fighting Talk exhibition on line.