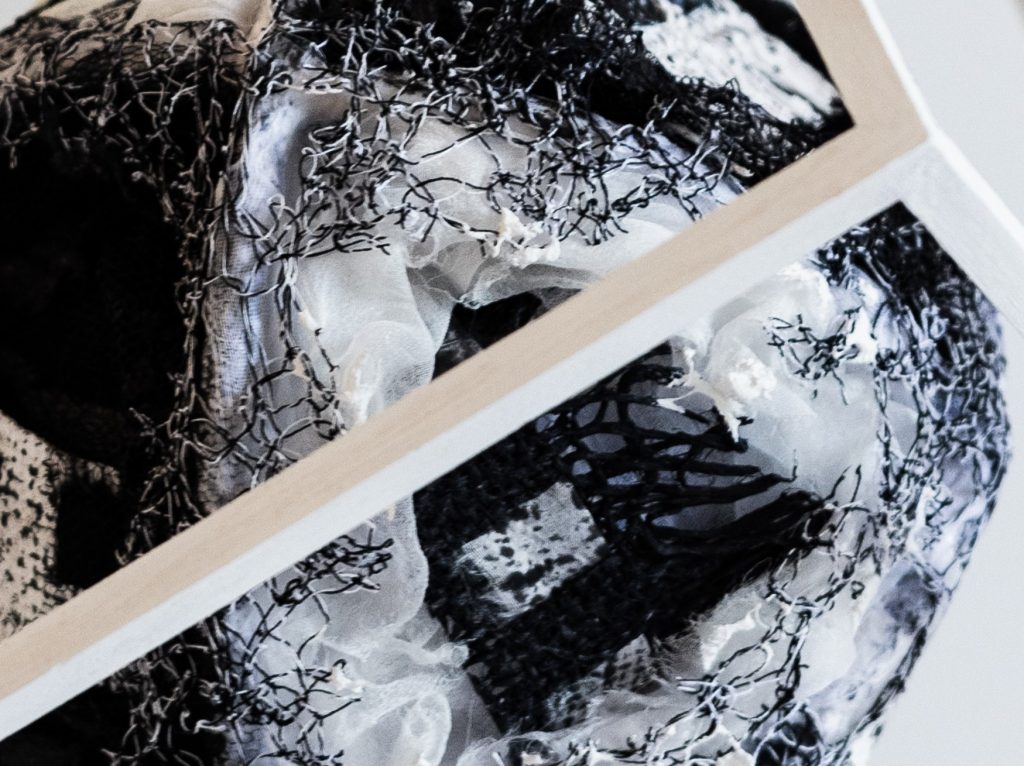 The Research behind the work

This week we feature the sketchbook behind the work of Kay Mullenger.

“The Alchemy of Grief is a series of 3D interactive works. My view on grief is that it’s universal, but not universally experienced, nor is it a neat journey with a neat destination that can be charted in a linear or predicted way.  Experience of grief is as unique as the individual.  Sometimes stages are gone through quickly, missed out, or revisited, possibly many times.  Sometimes people get stuck in a particular state, never to emerge.

My inspiration came from a drawing of a ball in a box, illustrating how grief can be felt as it changes over time.  This evolved into a plan (below) to represent stages of grief in a series of balls suspended in cube frames. Materials, textures and techniques used are my interpretation of the various feelings or states: Denial, Anger, Bargaining, Depression, Acceptance and Finding Meaning.”

“Each stage is inspired by a photograph that evokes a feeling in me.  The techniques used in making the ‘Anger’ ball also echo anger: there is much hacking, burning and distressing of the ball, with rusty nails being used in the final piece, which looks far more ‘angry’ than the page below.”

“Materials and techniques for ‘Depression’ are chosen to echo a state of submersion: water-soaked cotton with thick paint drips, fabrics that have been stitched with dissolvable fabric and then steamed to produce shrinkage, giving a random, gathered effect – a technique called ‘crashing’.  These are just some of the many contrasting and layered materials and techniques used in this ball – just as there is much contrast and oscillating of states and feelings in the state of depression, along with the hope of emerging from submersion.”

“The drawing of the ball in a box that I mentioned earlier was part of a social media post widely shared a few years ago, about a doctor likening grief to a ball in a box that, over time, changes in its interaction with a ‘pain button’ inside the box.  This instantly chimed with me, and the fact that I even saw the social media post was a rare thing, given that it’s not something I look at very often.”

“Of the many books and articles written on grief, the wisdom in ‘The Ball and the Box’ and also the following sources have helped me to make sense of some of my reactions to the various losses I’ve experienced:

Elisabeth Kubler-Ross and David Kessler: On Grief and Grieving: Finding the Meaning of Grief Through the Five Stages of Loss

Miriam Greenspan: Healing Through the Dark Emotions: the Wisdom of Grief, Fear and Despair