Ships and beads and octopi 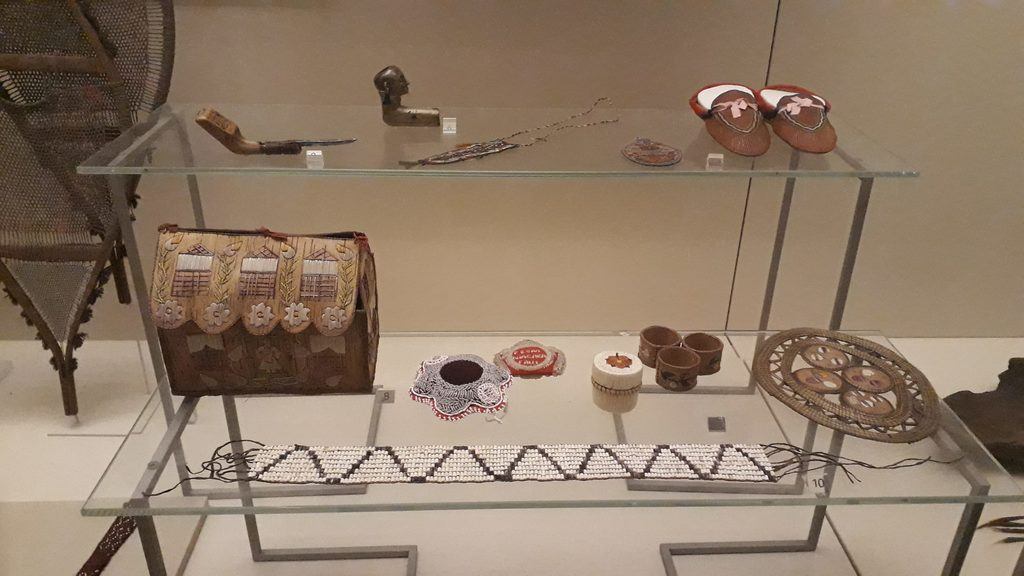 Walking through Billericay High Street earlier this year I came across this newly erected statue, commemorating 400 years of the town’s links with the first successful settlers in the Americas. Having grown up in Billericay (in Essex, UK), and attending a school named after the ship they sailed in (the Mayflower), I was surprised to realise how little I knew about the history. As far as I remember, the story from my school days was about about four brave Billericay men who were amongst the first to successfully survive in what was considered ’empty’ land across the ocean.

In the twenty-first century, I am pleased to say, this ‘great man’ narrative is outdated. I am glad to see in this modern sculpture the women and children are remembered too. The little girl’s face reveals just a hint of the terror these travellers must have felt as they left Plymouth harbour. But this is still only one part of the history – thankfully now we are also listening to the story from the other side of the Ocean. From the people whose lives were disrupted by the Pilgrims’ arrival. Indeed it was only in the last year that I learned that one of the reasons these Pilgrims survived in what they considered an alien land, (and later became America), was because they worked with, rather than against, the native people that they met. It made me very interested to know more about the broader history of Mayflower from an alternative viewpoint. Learning that the Wampanoag were famous for their beadwork seemed an interesting starting point.

This blog from the Mayflower 400 site has been a useful introduction. I found it of interest because it includes two videos told by the Wampanoag’s themselves. This film explains more about wampum beads and their cultural and historic significance. (The film is about 8 minutes long.) It introduces a project where contemporary Wampanoag artists were commissioned to recreate a new belt as part of a touring exhibition planned for 2020.

Wampum: Stories from the Shells of North America was put on hold, as were most of the Mayflower commemorations when the global pandemic struck last year. But they have not been forgotten. The wampum exhibition will be opening at the Guildhall Art Gallery in London from the 23 July to 5 September 2021 – free with general admission, though like everything now it needs prior booking. I will go and visit but have to say I could have easily missed this had I not been prompted by this octopus, found at Liverpool Street Station in London. It tells another part of the Mayflower story.

Journey of a Thousand Stars is one of a whole trail of octopi (or octopuses) dotted across Essex in the Harwich and Clacton areas (this is the only one in London) as part of the delayed Mayflower commemorations. This particular octopus (designed by Nik Richardson) reminds us how those early pilgrims had only the stars to guide them across the Atlantic Ocean. They would have trusted in their Christian faith to guide them safely, but the precariousness of the journey meant not everyone survived the journey. Religious persecution, escape across the sea and the hope for a better life in a foreign land – sadly this is as much a story of today as it is of 400 years ago.

Such commemorations are a reminder as why history is important, but only when considered from a range of perspectives. It might even help with our understanding of the present as well as the past. Perhaps I am most interested to see how some of this history can be told with beads.