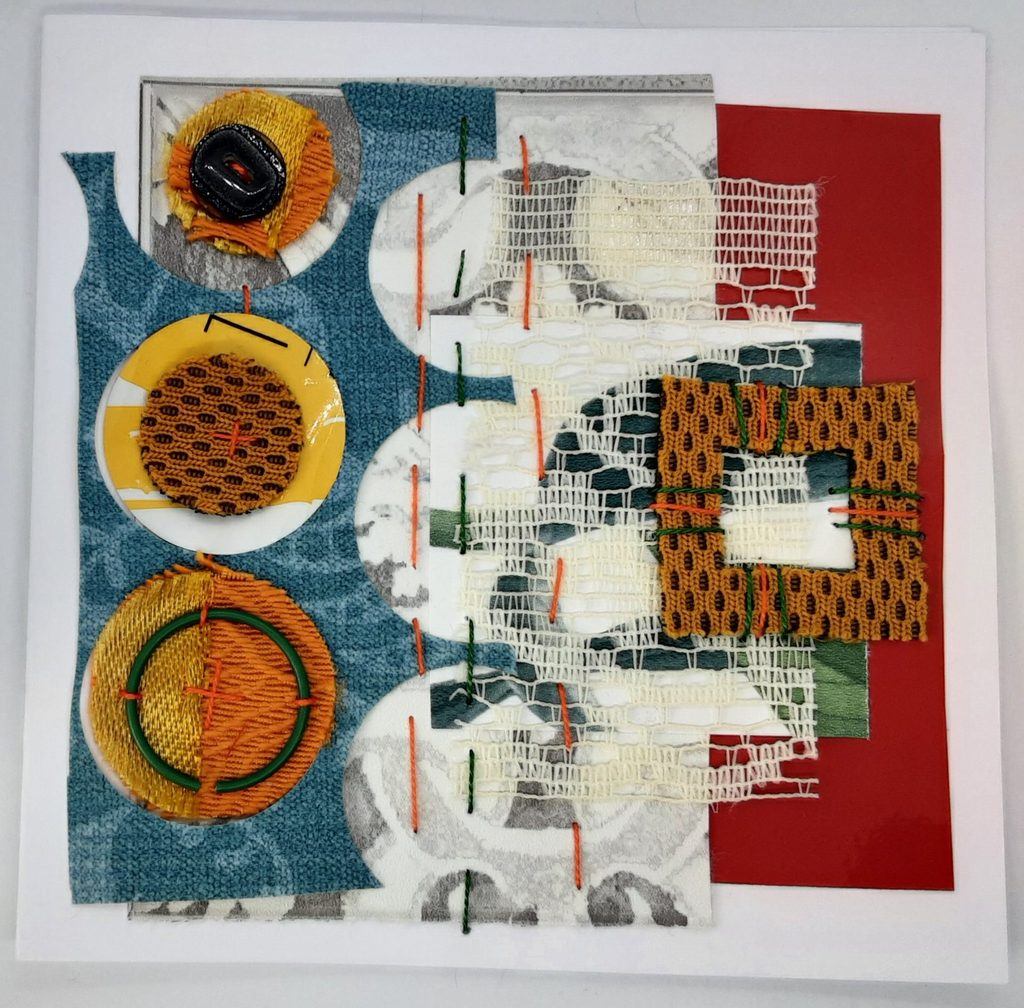 Stitching can be a very solitary practice – not necessarily in a bad way. It can be very pleasant to spend some time whether it be half an hour or a whole day (very rare), sitting and sewing and thinking. Or sewing while listening to the radio or a podcast, as noted in a previous EAST blog. But there is also a lot to be said to be working alongside other stitchers. It is something we have all been more appreciative of over the last few months because such shared activities have been denied to us. Thankfully with modern technologies we have been able to embrace video conferencing so we can still meet, (albeit via a screen) to sit and and talk and stitch together.

But working with others in creative pursuits can be more than just a chance to catch up with friends, swap ideas, seek advice or be inspired, as I learned at a Stitching Together workshop that I attended recently (May 2021). Stitching Together is a research network that brings together academics, artists, community activists, museum and gallery personnel and amateur enthusiasts. Indeed it is for anyone interested in the power that can be found in collaborative textile creativity. Unfortunately I was not able to attend for the whole day but thankfully the organisers record their sessions and they already share a vast amount of material via their website and blog. One of their most useful tools is their Good Practice Guidelines (available freely via their website) which should be a starting point for anyone interested in organising a collaborative textile activity.

This particular event really was a showcase for an amazing range of projects by some very talented individuals. I found some of the pre-recorded films not only interesting for the topics they covered but also the way they were put together. That is how practitioners used film as a medium to bring what were once thought of as domestic activities to a broader audience. There were projects to support imprisoned and vulnerable individuals, projects to document and understand dying practices, projects to help make sense of society and its problems and other projects that just reminded us of the beauty of creativity. Particular favourites included the performance weaving Soft Walls the creation of denirée isabel, Helen Liene Dreifelds, and Emma Aurelia (2019, a 4 minute film) and Lynn Setterington’s Sew Near – Sew Far (2017, 5 minutes). Lynn worked with the Bronte Parsonage Museum in Haworth, Yorkshire to produce stitched ribbons that spelled out the famous literary trio’s pen names on the landscape and I would recommend a viewing.

In between panels, attendees were given the option of joining breakout groups. At the click of a button you were randomly assigned to be part of a small group. In the first of these I found myself with an ex-EAST member’s daughter, a gallery worker in New York and one of the creators of Soft Walls (the project mentioned above). Our prompt was to discuss the distinctiveness of textile activities in comparison with other collaborative activities. In the second group there was only myself and one other assigned together but we had a hilarious ten minutes discussing the prompt of what would be our dream collaborative textile project.

There was also the optional extra of being part of a stitch meditation activity run by Jane Cook, who just happened to have been my City and Guilds teacher many years ago. The activity was based on the work of Liz Kettle who first came up with the idea of stitching as a meditative process in 2014. Now Jane runs a local group Stitch to Enrich, not only to encourage people to stitch in order to improve their mental health, but to combat loneliness. You can hear from Jane herself talking about this as part of the Stitchery Stories podcast from December 2020 as well as on the Stitching Together page. My results of the session can be seen at the top of this blog – but remember it is about the process not the outcome.

I have also added some images of the pieces I created following Chelmsford Embroiderer’s Guild recent online workshop with Jessica Grady. Again it was a chance to stitch as a group but because of Jessica’s ethos for recycling and finding new purpose for objects that are destined for land-fill, this was also an opportunity to think about the choices we make in respect of our practice.