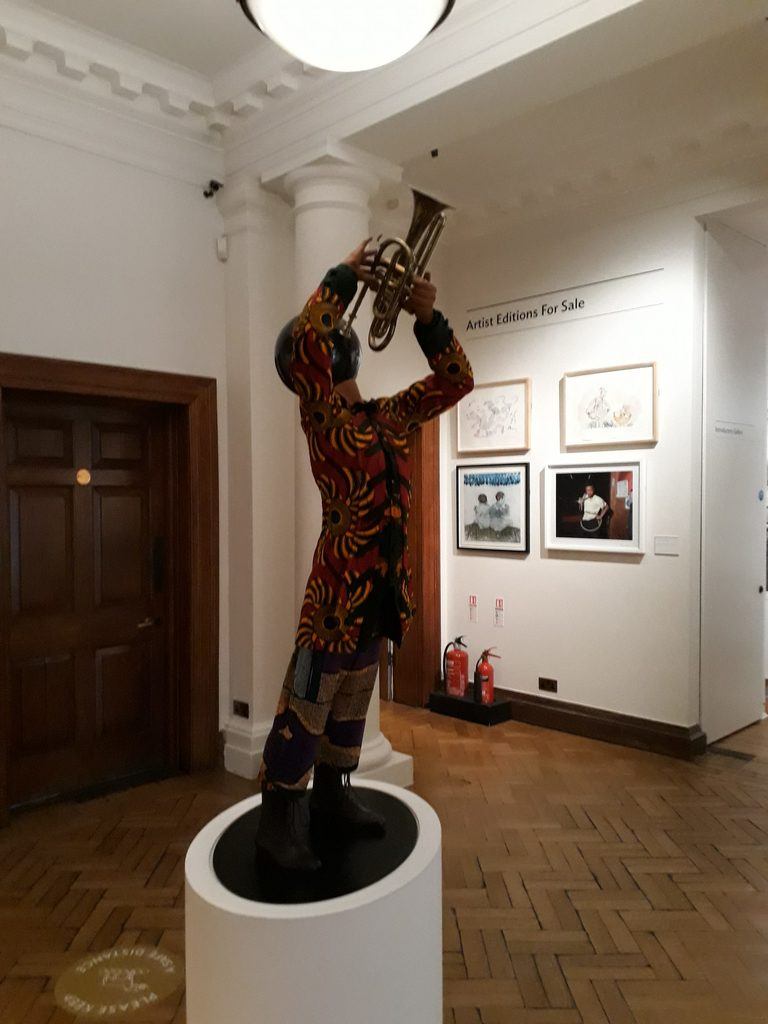 One of the privileges of working at a museum or gallery is the chance to see artworks repeatedly. You get to see works early morning and late afternoon, when there is no one else around. Repeatedly revisiting a work means you notice things you would not see on a single viewing. Reading about the artist helps you understand the context in which it was created. As a representative of the Museum you sometimes see the work from different viewpoints, by talking to visitors and seeing things from a different perspective. Then a global pandemic comes along, society changes and you look back at the same artwork and recognise references that were never obvious before.

One of my favourite pieces at the Foundling Museum is also one of the newest works in the collection – Trumpet Boy by the British-Nigerian artist, Yinka Shonibare CBE RA (b.1962). It first came to the Museum as part of Cornelia Parker’s Found exhibition, on display in 2016. The ‘found’ element in this piece is the trumpet – purchased at the Portobello Road Market. The Found catalogue description tells me that the sculpture ‘is a metaphor for the universal nature of music crossing all social boundaries’ and that the figure of the child ‘represents the non-prejudicial exuberance of childhood innocence’. It is entirely appropriate that a Museum that tells the story of a children’s charity supported by music and art, has this piece in its collection.

Of course as someone who is interested in both history and textiles in my artistic life, it is not surprising that I was drawn to this sculpture, and this artist. Shonibare regularly uses brightly coloured Ankara fabrics in his works, as a means to refer to Britain’s historical relationship with global trade. It is therefore helpful to understand why Shonibare uses this particular fabric in his works.

Ankara has a complex history. It was first produced in the Dutch West Indies, a geographical location we now call Indonesia.  Designs were originally handmade batik.  In the 19th century, West African men, some of whom were slaves and mercenaries working for the Dutch colonists, brought the fabrics back to their homeland.  Such was their popularity that Western manufactures saw a commercial opportunity by recreating the fabrics more cheaply, using a mechanical technique, devised by a Belgian printer.  West Africans were happy to purchase from these then new markets. The Indonesians were more reluctant, such was their preference for the handmade, despite its greater cost.  The textile later took on a new role when it became a symbol of West African identity and independence in the 1960s.  It is because of these complex history that Shonibare regularly uses Ankara fabric to refer to narratives of cultural identity, globalisation, colonialisation and post-colonialism.

The other major theme of Shonibare’s Trumpet Boy is music. The child’s head is a celestial globe, though the ‘stars’ it references are those of musicians – Madonna, Louis Armstrong, Philip Glass, Wynton Marsalis, and Ali Ibrahim ‘Farka’ Toure to name but a few. The reason music is so relevant to the Foundling Museum, is because of the role music played in supporting the charity – George Frederic Handel’s concerts brought visitors and donations. Later it was the children’s singing that drew the crowds, and gave some of the blind children occupational opportunities as teachers and performers. Since the beginning of the pandemic, I think many of us have appreciated the importance, but also the fragility of music as an occupation. For me Trumpet Boy, with his rainbow coloured clothes and his exuberant stance, now represents how art in all its forms have provided us with an escape and given us a symbol of hope.

I have not been to the Museum for some months (because of the pandemic), and so as well as the staff, volunteers and visitors, I am missing seeing the objects and artworks too. I took this photo on a rare visit last year. Sadly the brief period when the Museum was partly open in 2020 was to be swiftly followed by another when it was once again closed. During this pause, events of last year also meant a greater urgency for all cultural institutions to reconsider their historic past, in particular those that related to issues of race and global trade. Though the research is ongoing, the importance of this means that a more honest narrative will be told when we visit again. It also means that Shonibare’s sculpture is of even greater relevance now than when he first arrived.

With luck by the summer the Foundling Museum will be looking forward to greeting its visitors again. Trumpet Boy will be able to herald the return of visitors. He will remind us all of the importance of being honest about global issues and remind us to support the arts. I for one, am looking forward to ‘hearing’ his fanfare.