My inspiration for our next East exhibition The Power of Stitch comes from a trip in 2016 to Yellowstone Park USA, from that trip I have got very interested in the Power of Nature and how to interpret it through Stitch. I am sure you will have seen Volcanoes erupting recently, my ideas have morphed into lava flows very hot and cold. 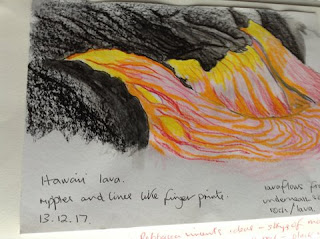 Another inspiration has been shibori, which I do with natural dyes and then leave it to dry so all the creases and wrinkles stay put. 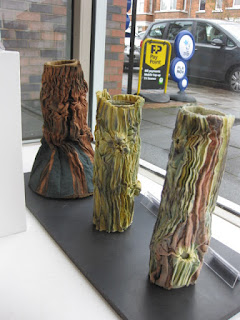 These are supposed to look like tree stumps or branches. 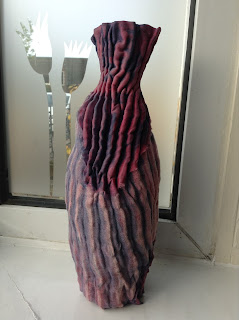 and this is a shibori vase.
So I have been trying to interpret lava with natural dyes and shibori. Its not easy to get a strong red with natural dyes, in the picture you will see fabric that is a silk cotton mix dyed with madder and also quite a lot of greys and blacks that I got by mixing log wood with iron and tannine. 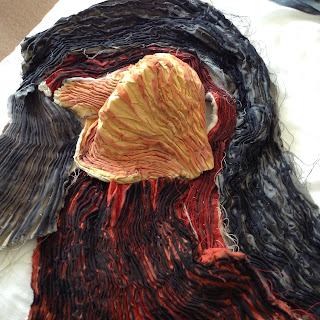 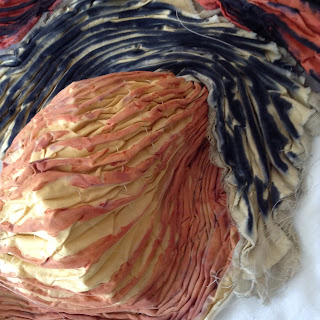 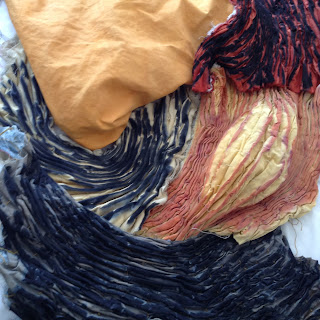 At the moment these pieces of fabric are just placed together, so I shall be playing with them and rearranging them, but there are more things to try, I hope to get a 3D effect so watch this space!

Textile samplers by Lorina Bulwer (born 1838), an inmate of the lunatic ward of the Great Yarmouth Workhouse – a fascinating story… 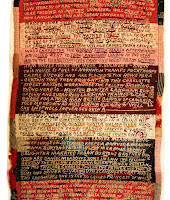 On Saturday I visited Norwich Castle Museum for a lecture that was part of the Women of the World (WOW) festival. It was all about the samplers and stitched letters by Lorina Bulwer delivered by Ruth Battersby-Tooke, senior curator of costume and textiles at the museum. I was treated to over an hour of (almost) non-stop information and analysis about the letters with close views of the exquisite pieces. The stories and facts about the Lorina Bulwer work are fascinating and entrancing. I was totally captivated.
Ruth’s enthusiasm, despite the number of times she has spoken to groups about Lorina Bulwer, was such a pleasure. She picked out parts of the text giving explanations but also throwing as many questions. There are many theories and suppositions around the text Lorina chose to use, how she was able to produce the work and how they managed to survive. Given that a lot of the text was very rude about (seventy) named people it is possible that other pieces she made did not survive, the recipients having thrown them out in fury. However, had the letters been written conventionally on paper it is unlikely that these fascinating pieces would have been kept.
Lorina’s anger and passion come through immediately in her use of strong and forthright language. Written as stream of her consciousness even though the pace of the stitching would not be as fast as her thoughts.  Repetitive, song-like words tumble and pour out, ‘AMY NANCY TICKLES MY FANCY (ref Billy Boy folk song).  Words all sewn in capital letters nowadays, in the digital age, gives the message a shouting voice but would have been easier to sew. Her spelling was excellent throughout her work except for three noteworthy words; eunuch, hermaphrodite and majesty. 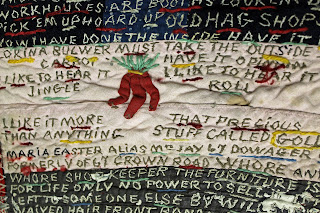 The technical discussion interested me too. How Lorina made the stitches so uniform (generally) and on different types of fabrics pieced together like a patchwork. Fabrics may have been donations to the workhouse for rag books and a mixture of institutional fabric, ticking, velvet, silk and cottons. The bindings around the edges differed, sometimes small pieces of fabrics patched together or longer lengths with more words stitched on top bordering around the main body of the letter. Many words were underlined with contrasting coloured stitches to emphasise them and some words have a shadow that make them stand out more. ‘O’s were sewn by pulling through a loop of thread and couching it, helping with speed. It has been calculated that for the 12-foot-long piece it would have taken about six months.
The act of stitching can be such a therapeutic activity for many people, used over centuries and particularly in times of stress and trauma such as soldiers convalescing. Looking on the www at the links nowadays one gets links to stitching and mindfulness, giving time for reflection, recovery, peace. When the medication route doesn’t seem to be working for many troubled minds nowadays why isn’t therapeutic stitch not used more, nor promoted more as part of the cure in mainstream healthcare? “Stilling the mind by busying the hands”.
For more about Lorina Bulwer’s life and Ruth’s involvement click on the link https://frayedtextilesontheedge.wordpress.com/2013/08/28/looking-for-lorina/
Ruth can be reached at Norwich Castle Museum (https://www.museums.norfolk.gov.uk/norwich-castle)