Arty Day Out in Suffolk

As July is my birthday month I thought I would try to do a blog post for each week – so here goes with my final birthday post.
This Sunday three ladies (Lorna, Carol and myself) in a car set off for Snape Maltings, Pond Gallery, to see the textile exhibition by Anglia Textile Works called Sentinels.  This group includes textile artists Fay Allwood, Yvonne Brown, Niki Chandler, Kathy Colledge, Sara Impey, Chrissy Leech, Annette Morgan and Cherry Vernon-Harcourt.  Each artist had interpreted the title of the exhibition in their own particular way and most of the works take the form of panels.  Below are a few pictures of some of the work.  The exhibition continues until Wednesday 26th July.
The photo below shows work by Fay Allowed and Sara Impey. 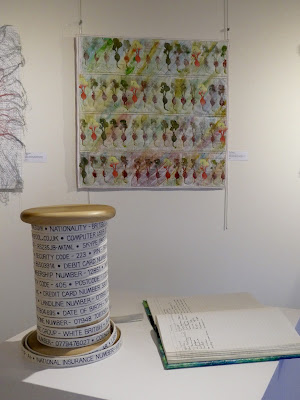 The photo below shows a detail from the work of Kathy Colledge. 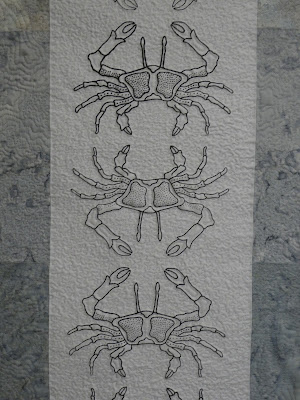 Part two of our day out, after a delicious lunch of course, was to drive onto the Suffolk Craft Society exhibition at the Peter Pears Gallery in Aldeburgh.  However, before we climbed the metal staircase up to the gallery, I noticed another gallery had opened on the ground level underneath the Peter Pears and to my delight I saw that the work being exhibited was by Sara Johnson, a watercolour artist.  I noticed Sara’s work when EAST was exhibiting at the Pond Gallery in Snape – Sara’s work was being shown in the Maltings Gallery.  At the particular moment we spotted the gallery the heavens opened so we rushed in to look at Sara’s work which is so subtle and just enough to indicate watery landscapes and straw coloured fields and shadowy shapes in the distance.  The additional bonus was that Sara was actually there and we had a lovely chat with her, discovering that she is giving a few experimental, technique based workshops at the Watershed in St. Osyths – feeling very tempted.  On top of this she lives in Bungay and knows Jo Budd, another textile artist I much admire and with whom I am doing a workshop in September, making me feel even more tempted to book Sara’s workshop at the Watershed.  However, it was Carol who gave into temptation by buying one of Sara’s small pieces.
This picture by Sara is one of my favourites that I saw when visiting the Maltings Gallery. 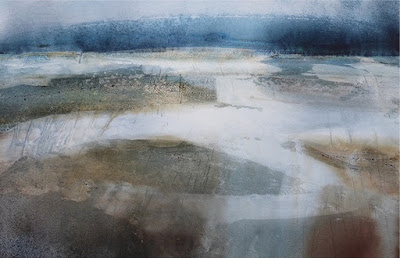 It was still raining when we emerged from the ground floor gallery so we dashed up the staircase to the Peter Pears to see the Suffolk Craft Society exhibition which is held here every year.  It is always good to see all sorts of crafts from amazing woodwork to weaving, glasswork, ceramics and the stand out pieces for me were some wonderful metal work pieces by Zoe Ruben.  She works at her East Anglia studio with ferrous and non-ferrous metals, both cast welded and etched to produce intriguing sculptures.  I found the best place to look up her work and to view images is on Pinterest.

Textile art work for the Crown Hotel Biggleswade, I have been lucky enough to get a commission to make a textile work for the Crown Hotel, it is being refurbished by Wetherspoons and will be re opening in about 2 weeks.
Its a big piece 40 inches wide by 30inches high and time was limited so it was a bit like running a stitching marathon. 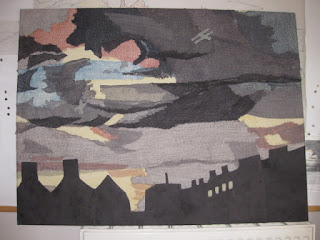 They wanted some aspects to be local so the silhouette is of the high st Biggleswade and the windows indicate where the Crown Hotel is. Its called ‘Big Sky’ I was inspired by some Turner skies at the beginning of the year and I thought I’d love to try to capture something of the texture in textiles. Can you see the planes when I visited six weeks ago there were planes from the Shuttleworth collection in the sky. 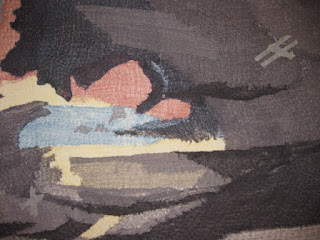 Here is a close up.. perhaps you can see the kantha like stitching.

I used  sketches of a stormy sky and of the high st to guide me. 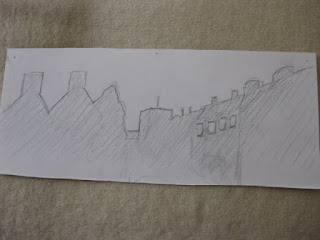 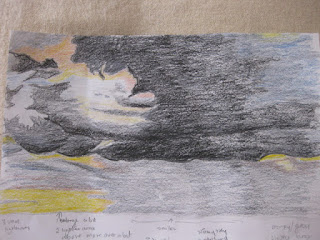 The fabric is naturally dyed scrim and muslin.

Sometime last week I picked up a Cambridge Open Studio catalogue and flicking through it  and thought I would visit a few artists the weekend just gone (15th/16th July) which actually was the third weekend out of the four that the studios were open.   On looking through the artists, to my delight, I saw that a ceramics artist, Sarah Jenkins, who I much admire was opening her studio in North Essex.  I think it was a couple of years ago I bought a piece of Sarah’s work from Bircham’s Gallery in Holt, Norfolk.  I so love her style and her work just seems to get better and better.  On reading about her it said
“Sarah’s journey has been unconventional, and includes: leaving her Fine Art degree; a long period working as a plasterer in the building trade; adult education classes; clay work with people with mental health problems; a lot of experimentation, including building more than one studio and raku kilns and a sabbatical in a Cape Town ceramic studio where Sarah was able to focus on consolidating technique.
Sarah’s ceramics are always hand built and fired several times. Currently, she likes to use simple slips and oxides with scant use of glaze.”
On meeting her on Saturday I found out that she had studied at Braintree College for two years and just happened to mention “Did she know Grayson Perry” as he had also studied at Braintree College.  Her reply was “Yes, I was there the same time as he was although we haven’t stayed in contact.”
Her studio is lovely, close to her home and tucked down a narrow lane that went on and on until it came to a full stop with Sarah’s thatched cottage and studio.  Her ceramics are very much a reflection of her and her experiences and I find them very inspiring – as of course they are all about landscape.  The material may be different to what I use but I just love those simple marks and shapes that capture what I see around me. 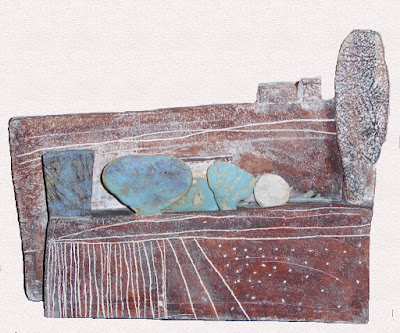 Paul Nash at the SVAC

This week I went to see the Paul Nash exhibition at the Sainsbury Visual Art Centre in Norwich which is on until 20th August, 2017.  Paul Nash is best known as a war artist, in particular I associated him with the First World War but he was also a war artist again during the Second World War.
The exhibition starts with his brutal 1stWW landscapes and explains how he preferred to use symbolism to depict the devastation of war.  From these paintings the exhibition then moves into his earlier dream like works, still of landscapes, influenced by the poetry of William Blake and the pre-Raphaelites.  The exhibition also covers his work between the wars – during the 1920’s he suffered from depression and emotional shock as a results of his war experiences and moved the Dymchurch where he continued to paint – it is said throughout 1924 and 1925 he taught part-time at the Design School at the Royal College of Art, where his students included both Eric Ravilious and Edward Bawden – two of our local Bardfield artists.  During these inter-war years he explored other art movements such as abstraction, surrealism and modernism. “He was a founding member of the British modernist group Unit One which included painters, sculptors and architects such as John Armstrong, Barbara Hepworth, Tristram Hillier, Ben Nicholson, Henry Moore and Edward Wadsworth” and the exhibition includes works by some of these artists.
Again at the start of the 2ndWW Paul Nash was appointed as a war artist and there are two large paintings in the exhibition, “Dead Sea” which depicts the vast wreckage of fighter planes at the Cowley Dump near Oxford as waves in an ocean and the second painting, which I believe is “Battle of Germany”, shows an aerial view of a town before being bombed on the lefthand side of the painting, the central section shows white spots representing parachutes coming down and then the devastation of an aerial attack on the righthand side of the painting.  The exhibition then moves  to the landscape paintings that he was working on leading up to his death in 1946.
Definitely an exhibition worth going to see.
When EAST hired the Zinc Art Centre in Ongar last year for a workshop I created this free standing, three dimensional landscape inspired by Paul Nash’s landscape, “Wood on the Downs” painted in 1929.  It’s not a finished piece but just part of a journey. 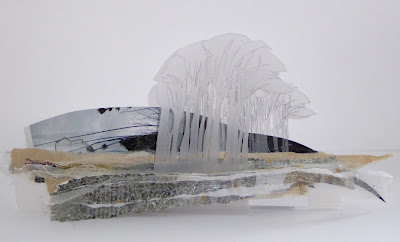 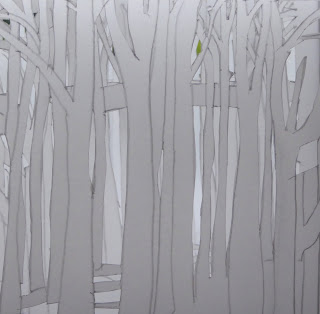 A hard day at work 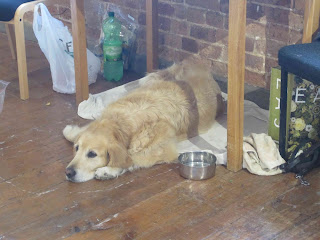 She had a very busy day greeting all the visitors. 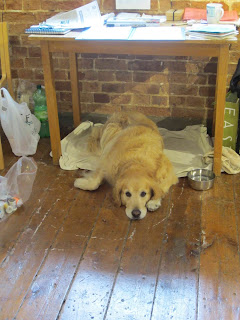 Roots Shoots and Leaves is an Eco Textile Exhibition developed from From the Earth, which was at the Mardleybury gallery in June 2016. 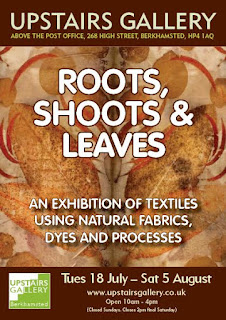 Caroline and I have been working with the Upstairs Gallery and we are very pleased to have new artists taking part as well as artist from last year.

This work by a new artist Ken Ager, his work is called Cedars. 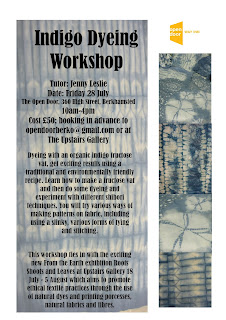 To go with the exhibition I will be offering an indigo workshop making and using an environmentally friendly fructose vat.

Whilst on holiday in Shropshire earlier this year I found a lovely book of poems by Kate Innes titled “Flocks of Words” which is also the first poem in the book.  It is so beautiful and is about how the changing words that describe a landscape as it moves through the seasons fly away, migrate like birds.  It describes a naked landscape in winter and imagining “that land in spring and watching the words return” and putting them on “like fresh plumage or a newly laundered dress”.  Definite inspiration for new work.
I love a good poem to get my creativity going and yesterday I was reminded of the work I did last year on Emily Dickinson.  I put together a book about different aspects of her life and hand embroidered part of a poem on a double layer of silk organza, a technique I was taught by Rosalind Wyatt and is based on chain stitch.  Whilst trying to master the technique Rosalind said it was not important that you could see the threads showing through from the back of the work and that also not to worry if you couldn’t read it very clearly, it is the overall impression of a handwriting, being able perhaps to pick out an occasional word and what it all might mean.  I have used different shades of grey thread to give the impression of fading. 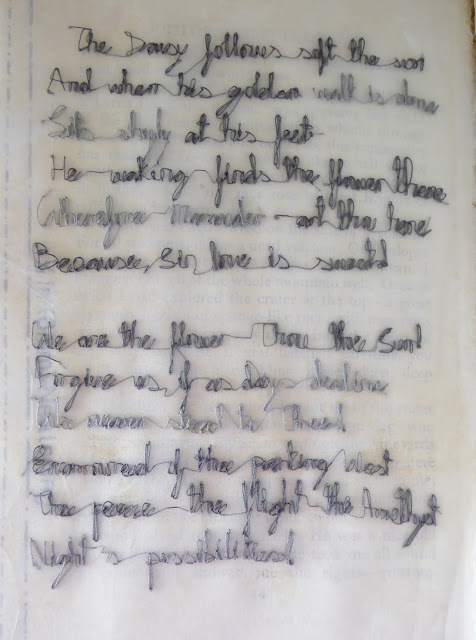 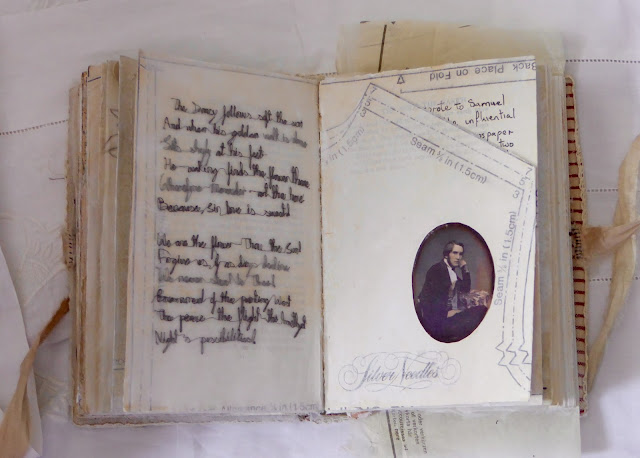