Last weekend I spent three days – well two and a half actually because I had to look around the Textile Gallery – on the Embroiderers’ Guild stand at the Harrogate Knitting and Stitching Show.
The Guild exhibited in the King’s Suite, a gallery which was opened at the show for the first time and turned out to be a large, wonderful space.  Anyone visiting the Learning Curve had to pass by, and there was a lot to see: the Graduate Showcase, the Capability Brown project, items from the Collection, small pieces from old textiles and books and magazines to buy.  There was also the opportunity to join the Guild and several members of the public did so.

I spent most of the time encouraging the passers by to add to the longest embroidery which stands at six hundred and five metres in length and was begun in 2003.  Needless-to-say only about eight metres was on show at any one time but people were able to find plenty of space to add their stitches.  One fourteen year old girl reckoned she had never sewn before but she produced an immaculate line of straight stitching roughly twenty centimetres long which she wove through.  I managed to persuade a couple of husbands to add some stitches and the boyfriend of a stitch enthusiast added some marks in recognition of an earlier weekend with his girlfriend at a motor show.

I know that many of the EASTies are members of the Embroiderers’ Guild attending different branches in the Eastern Region, and like me, I’m sure, would have been impressed by the display presented, due in no small way to the hard work and commitment of Anthea Godfrey, the Artistic Director of the Guild and, of course, our mentor.  However, she wasn’t alone.  Pat Tempest, Annette Collinge, Alex Messenger, Amanda Smith and Liz Smith from the Guild also gave their time and enthusiasm to make it a very successful  weekend.

I had a brilliant time and I have posted three images – one of the White Walker who spent the weekend in Hall C and I helped to dismantle, and two from the Capability Brown Project – a detail from work by Sian Martin and Diana Springall. 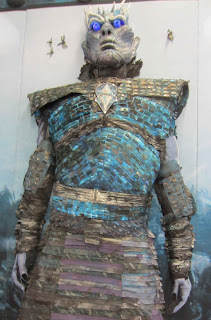 The White Walker and 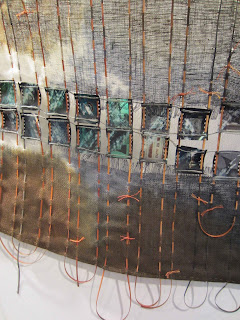 and a detail from Sian Martin’s and 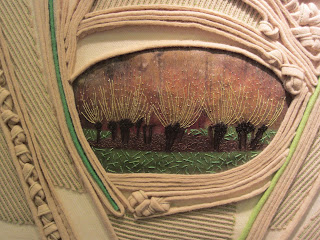