Yesterday Carol, Libby and I ran a stall on behalf of EAST at the Braintree Museum’s Christmas Fair.  The event was run to coincide with turning on the Christmas lights in the town but that wasn’t going to happen until it became dark.  In the meantime there was a choir, two groups of Morris dancers, one male, one female, and some stalls in the centre of town.

There were eight tables in the Learning for Life room at the Museum of which we were one.  Several sold food and the remainder were displaying crafts.  One interesting stall was run by two newly qualified graduates who had set up a company called Boxford Candles and made scented candles in tins and chinaware which they had bought at auction.  Carol and I smelt their wares and Carol spent some money.

Unfortunately for us all, the weather was extremely cold and the town fairly quiet.  Towards the late afternoon the Museum filled up a little with young families because there was a children’s workshop and a face painting event.  However, the clientele were not really interested in our beautiful, handmade decorations and present ideas.

We did sell a few items but only to ourselves, so we packed, up early and got home before it was too dark.

Every cloud has a silver lining. 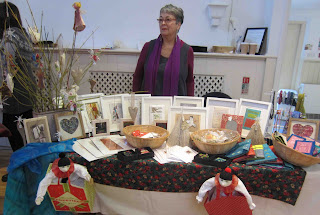